Using TamperMonkey for my recent post about messing with the Pepsi ROTY vote had me kind of on the lookout for other scripts to write.

I often recommend new potential programmers who aren’t sure coding is for them try JavaScript (over Python) specifically because it allows you to immediately jump in, either via the Chrome Devtools console, or things like UserScripts, and mess with web pages for real. Silly things like removing elements of a page or changing how a button behaves can really give you that HackerMan™ feel, even if you’ve been coding for a while.

Automating Things for the Sake of Automating

Today I got around to thinking about a minor improvement to my life that 100% conforms to the “why do something mildly inconvenient in six seconds when I could spend 30 minutes automating” mindset.

I’m a fogie, by which I mean I still use old.reddit.com. I hate the new design for a lot of reasons, especially visually, but I specifically love the old design because it works with Reddit Enhancement Suite (RES). One thing I really love about RES is its keyboard shortcuts. I’m a big fan of Vimium but RES works way better, so I disable Vimium on Reddit. One of the best keyboard shortcuts is the one that lets you jump to a subreddit from r/all. However, 99.9% of the time when I use that keyboard shortcut it’s to go to a sub I just found and the first thing I have to do is use my mouse to the top of the page to select top of all time. Can’t have that.

So I decided to write a little script in Tampermonkey that makes it so that all the subreddit links link in a new page to the top of all time in a subreddit.

Whatever. Vanilla JS is fine, honestly. I don’t get enough chances to write fat arrow functions (which are honestly one of my favorite. I way prefer them over Python’s Lambdas)

The first thing I tried was to add another link next to the subreddit links so I’d have the option to go to either top all time OR just the regular sub. 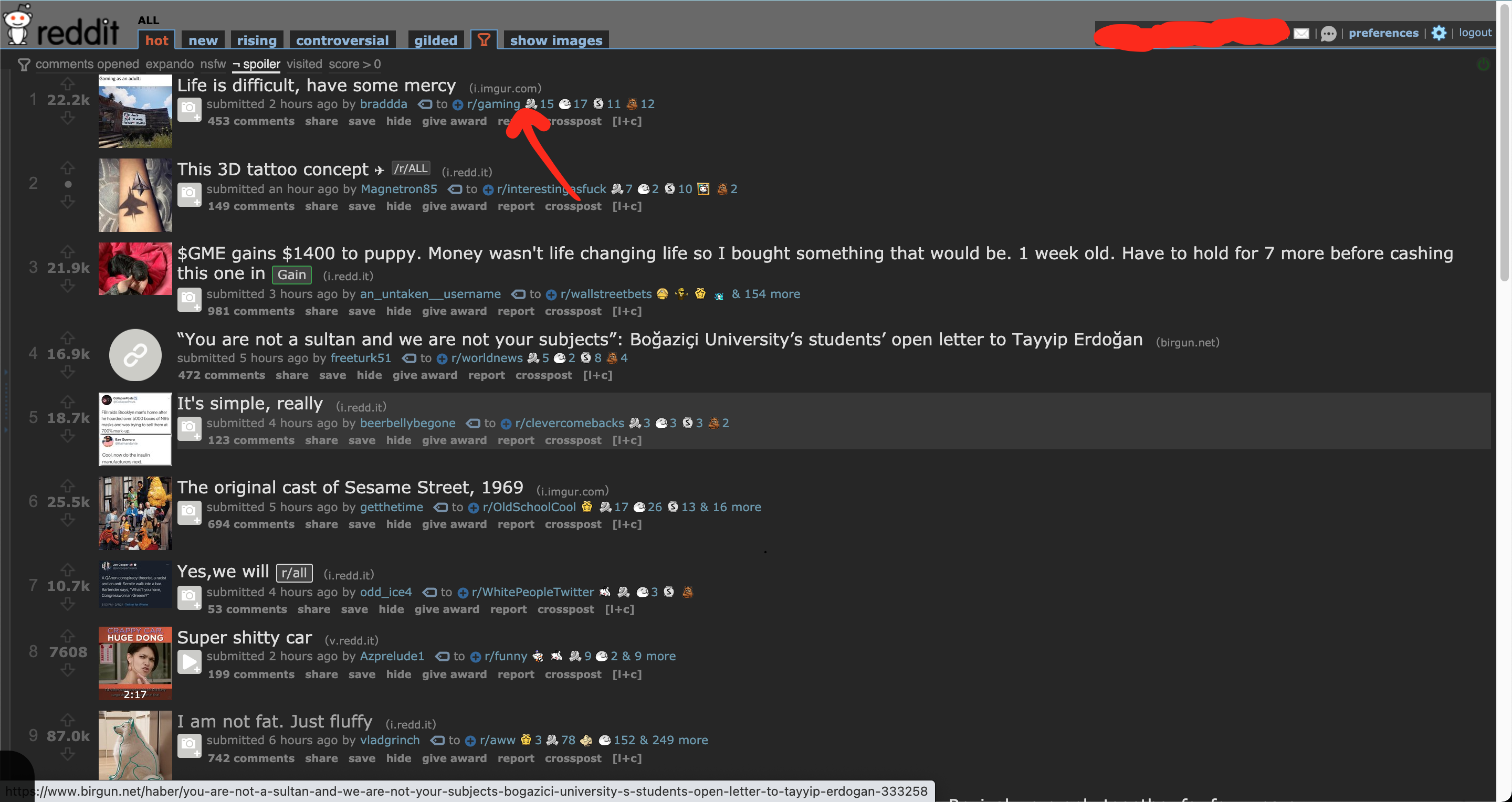 but I immediately encountered a goofy problem. See, when you use document.getElementsByClass('subreddit'); to get all the subreddit links, that list doesn’t actually return a normal JavaScript Array, it returns an HTMLCollection. Which I assumed would behave close enough, but first of all forEach is not defined on it so I have to use a for of loop, and second, when I do loop over it for my first trip it hangs… and by adding a cap on the number of iterations I can see why. 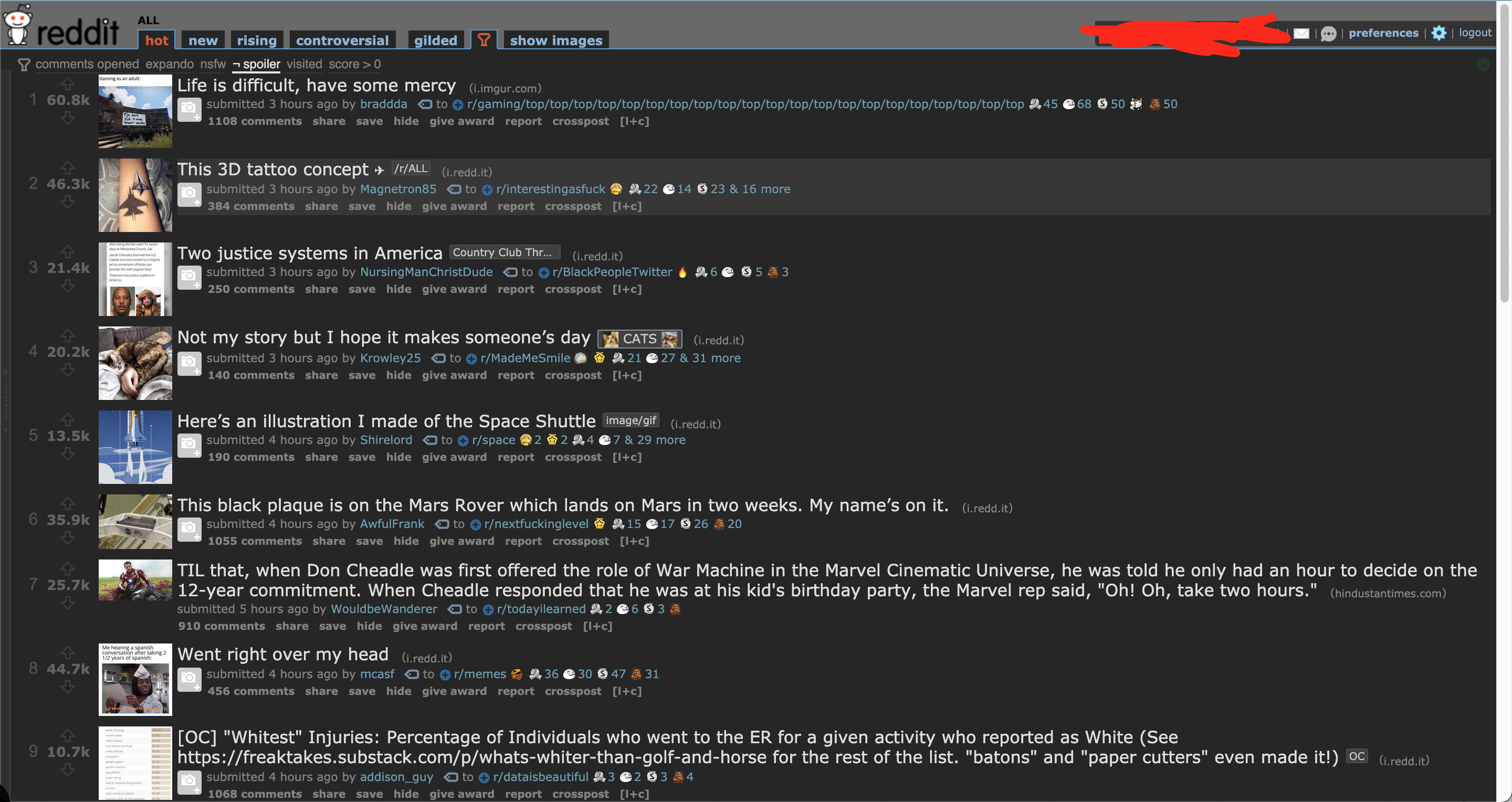 The lazy workaround is to modify my goal and just change the links to point to the subreddit’s top all time, rather than adding an additional link.

and this does work 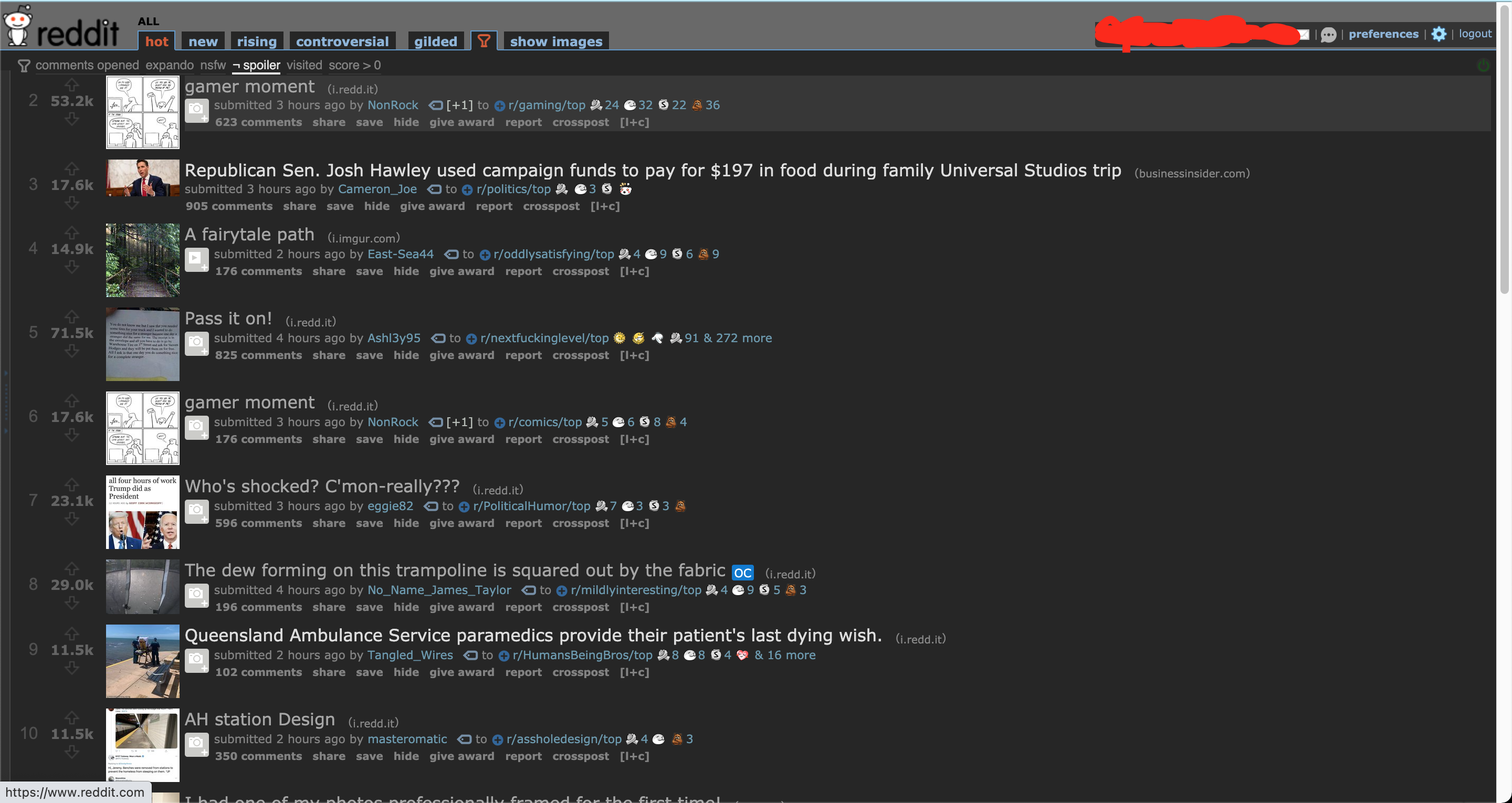 but it leaves something to be desired. Now if I actually just want to go to the subreddit, that’s a pain.

Back to Basics with querySelectors

With a quick search I was able to find other people encountering the same problem as I did with HTMLCollection being dynamic. This blog post has a great explanation of a workaround, which is to use document.querySelectorAll which returns a NodeList instead, and NodeLists are static. 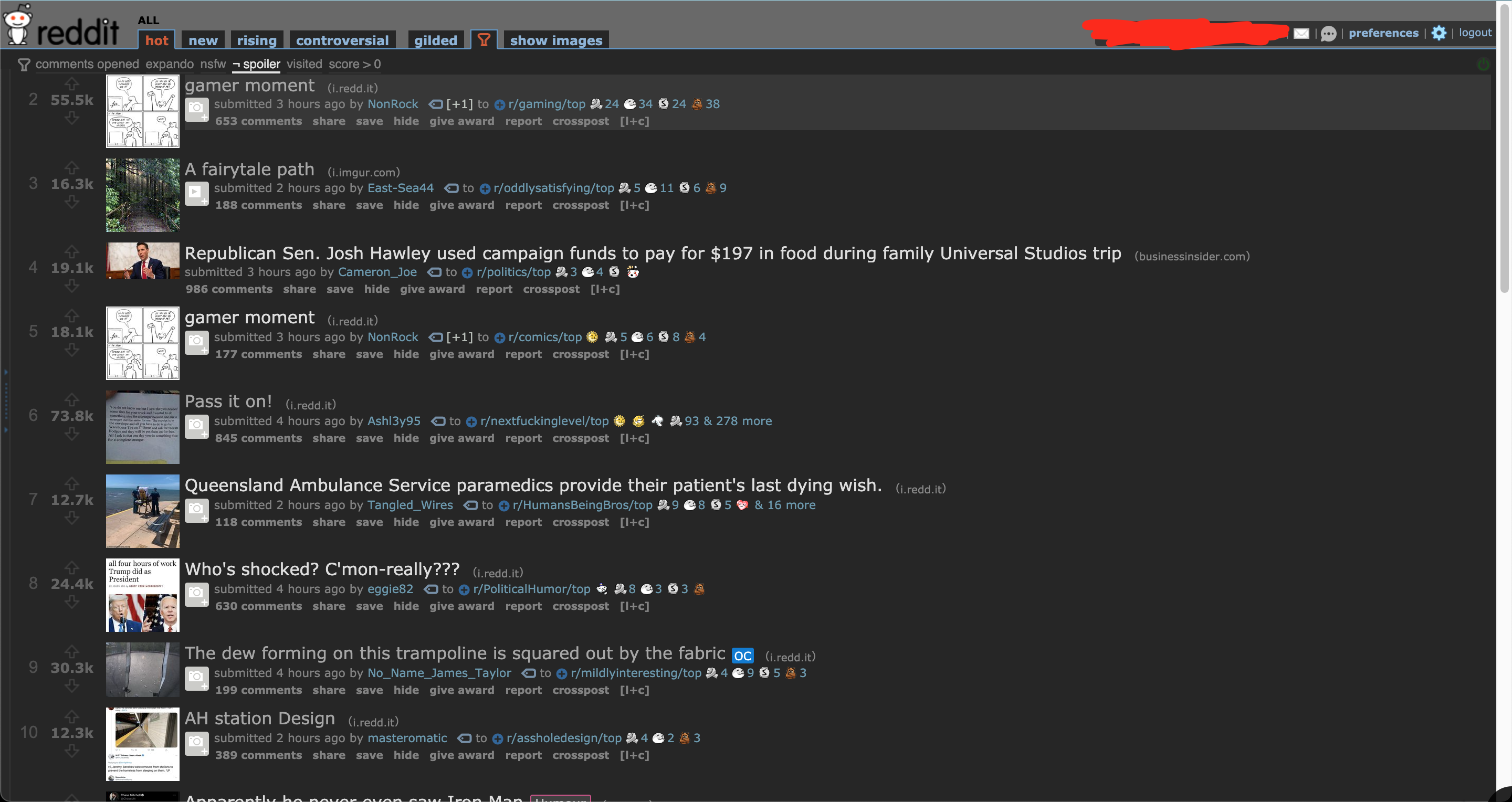 It looks like nothing changed, but actually, it has! There’s two links there, smushed right next to each other. And by clicking on either of them, I can tell that one does indeed go to r/gaming and the second goes to r/gaming/top which is great.

By adding a 3px marginRight to the style of the original element I can split the two apart so that it looks a little nicer. The one thing that’s missing is that on line 16 I added "/top" to the end of the textContent of the original element for the new element. So I expected it to be r/gaming/top, not just /top. It turns out that HTMLElement.cloneNode() has a parameter, deep that defaults to true, which means the textContent isn’t getting copied. So with one final change, here’s the final script 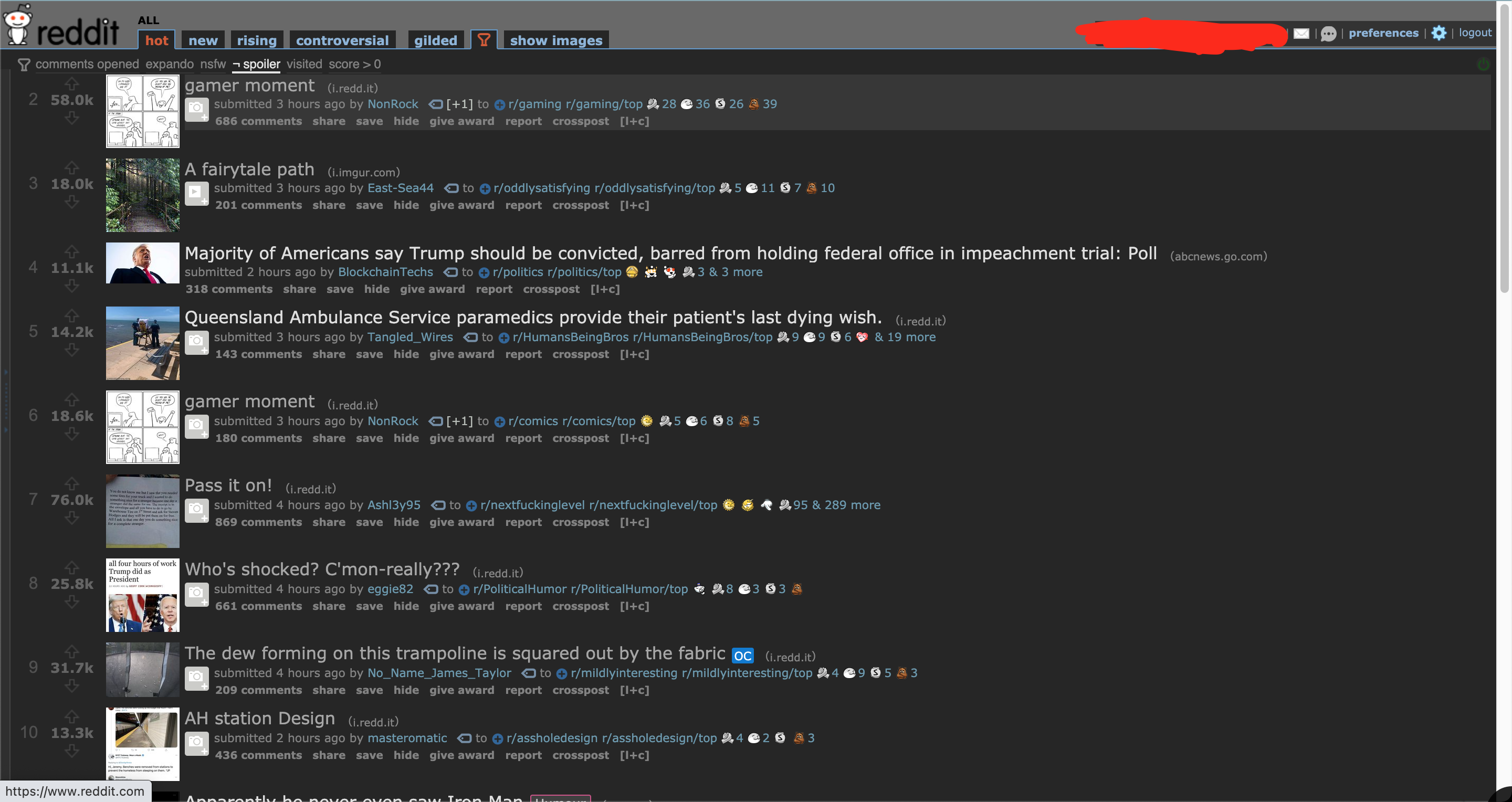 Cool! And as a final bonus, now that I’m working with a NodeList I get NodeList.forEach().